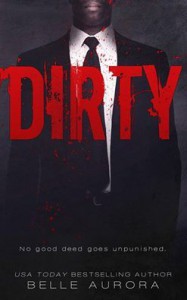 I had to sit and think a bit before I wrote this review. I've been waiting for this book for what feels like AGES. So you can imagine my excitement when I was offered an ARC. Dancing around the apartment may or may not have occurred.

Unfortunately, I didn't love this one...sigh. It was ALL over the place for me. There are two separate storylines that take place in it, and I found that the secondary one took away from Julius's and Alejandra's. Their story just never felt fleshed out enough for me to connect to them as a couple. We go from "I am going to kill you" to "I am going to keep you forever" in like the span of a day. Then we have Julius pulling a douche move of EPIC proportions that just comes out of left field. Umm *BOUNCE* seriously?? We also have a fourth POV (Ling) that AGAIN, in my opinion, took away from the main characters. Of course, that could be because I LOATHED her.

I almost feel like the author would have been better served to make the secondary storyline a novella heading into book three (yes there is going to be ANOTHER book) and gave the extra page space to fleshing out Julius's and Alejandra's story. Since the two storylines were connected by the thinnest of threads.

I also wasn't feeling the sex scenes in this one. First, there isn't really that much, to begin with, and the VERY few there were are lukewarm at best. It's been awhile since I read book one, but I seem to remember it having dirty hot sex scenes. So I kept waiting, and waiting, and waiting. Oh good, they are going to have sex. THEN Julius says to Ana "I won't go down on you, or have sex with you bare because you have a douche of a husband who cheated on you and I'm not going to take the chance of catching something" (I'm paraphrasing) Realistic, I guess, not in ANY way, shape or form, sexy though.

Of course, this is just one person's opinion and you may LOVE every minute of this book. It wasn't a badly written book. And maybe I had my expectations set too high. I enjoyed it enough that I will be reading book three, since really, that is the book I have been waiting for since book one ended.