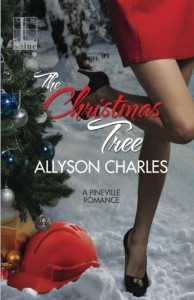 Sadie is in Pineville, Michigan to check out the house her grandmother left her. One quick glance at her phone and a raccoon sets off a domino effect ending with a light pole right down the middle of someone's truck.

Colt McCoy can't believe his eyes when his truck is destroyed by a falling light pole. When he finds out that Sadie was looking at her phone instead of the road, he loses his temper completely.

Calling the police doesn't exactly end as planned with them both having to serve community service decorating the town Christmas tree. What starts with anger and barbed words, soon turns into something a whole lot more.

I absolutely ADORED every single minute of this book. It made me laugh out loud SO many times I lost count. The hero and heroine were extremely likable. The banter between them was HILARIOUS at times. Colt was such an ass at first, but he gets over himself quickly and isn't afraid to apologize when he is in the wrong. Sadie was just super sweet. The things her and Allison got up to together..LMAO.

The festive small town feel was enjoyable, as was the plethora of secondary characters that you won't help but fall in love with. From baddie David (I think he is just misunderstood), to Jerome the single father cop. Not to mention Sadie's sidekick Allison, the "tree twins", and even the mayor get in on the matchmaking act. SO many well written and enjoyable secondary characters that added a nice backdrop for the main couple.

Add in some sexytimes (fairly mild), a little relationship angst (just a smidge), and this one should definitely be on your holiday TO READ list. Two HUGE thumbs up from yours truly.